Moving from a 4000+ square foot home to a 2000 square foot home was just one of the many adjustments we were willing to make to live in a great location. I often go back to the day we made this decision and wonder, what the hell were we thinking?! There is no escape from each other! I find myself grinding my teeth almost immediately after the kids walk in from school. The concrete walls and marble floors send the decibel level to new heights. Living in such a small quarters, it gets messy and quick. My kids joke that I should become a detective (actually a lifelong dream) because I can recreate the crime scene in about two seconds.
Crime scene: Empty can of Sour Cream Pringles lying on the floor between the couch and sofa table. I shall recreate the crime. The perp started in the kitchen. He opened the cabinet frantically looking for Sour Cream Pringles while knocking over the other two can of Original Pringles. Perp was in a hurry and neglected to close the cabinet door. Starving, he opened the can and left the lid on the counter. Stuffing his face with a stack of Pringles in his mouth he left a small trail of crumbs leading to the sofa where he plopped his butt down to watch tv. At this point the ravenous perp committed the horrible crime. Crumbs flew, evidence became lodged in the crevices of the couch, this guy was going down. I lined up the suspects looking for evidence. Not to my surprise, the suspect still had bits of Pringle stuck to his shirt. Upon further taste testing, I confirmed they were in fact, Sour Cream Pringles! Perp caught…the end.

Although I love playing detective, the constant clean up is not fun. Leaving the smallest crumb will bring tiny ants and huge cockroaches. Bill and the kids kept pushing the idea of the live in helper. I was not on board with this and opted for a part-time helper to come clean three times a week. How awesome is that? I was ok with it, but Bill and the kids still wanted a full time helper. Why, you ask? FOOD!!! No fast food drive through here, which means more cooking. Why was I still so against a live in? Well, two reasons. One, the helper room was our storage room. What would we do with all the stuff in there? Two, what would my role be? Well, Bill took care of number one and got everything put in different locations. So now it was only about me. I struggled with this for about two months. Do I really want someone else living with us? How will I closet watch Orange is the New Black, while eating a bag of chips for lunch? (No, not the Pringles!)

Most of my friends have live in helpers (FDW – foreign domestic workers), and love them. The cost of having an FDW is actually the same as the part-time coming in three times a week. So, I decided to take the chance and I’m so glad I did.

I’d like to introduce our newest family member, Jocelyn. She is from the Philippines, single, no children, and has such a giving heart. She spoils the kids rotten and treats them like they are her own. She loves to watch Robert play soccer (picture below)! Our home has never been so clean. She is a wonderful cook and surprised us with red velvet cupcakes upon our arrival back from Bali. Yes, I think I could get used to this.

I’ve made one adjustment since Jocelyn has started. I now watch Orange is the New Black behind closed doors… 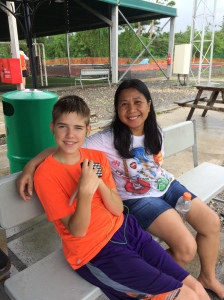